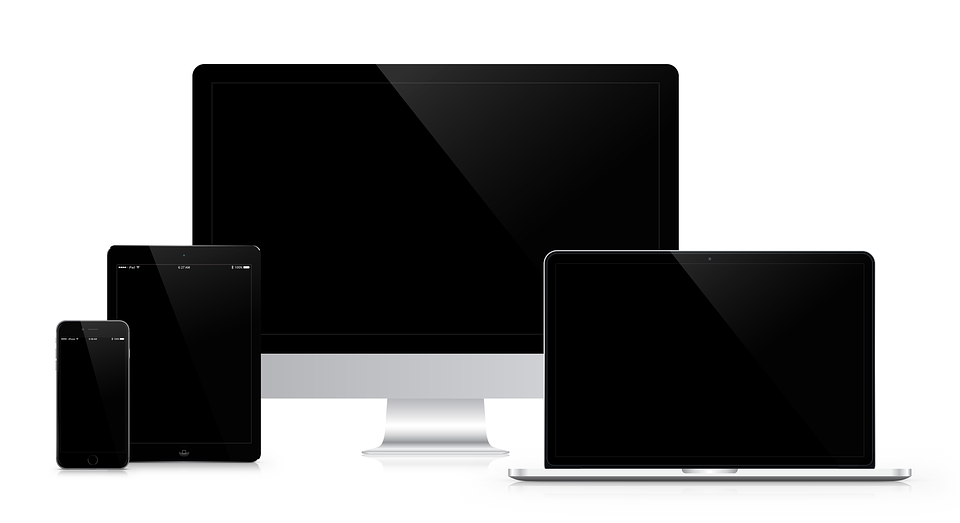 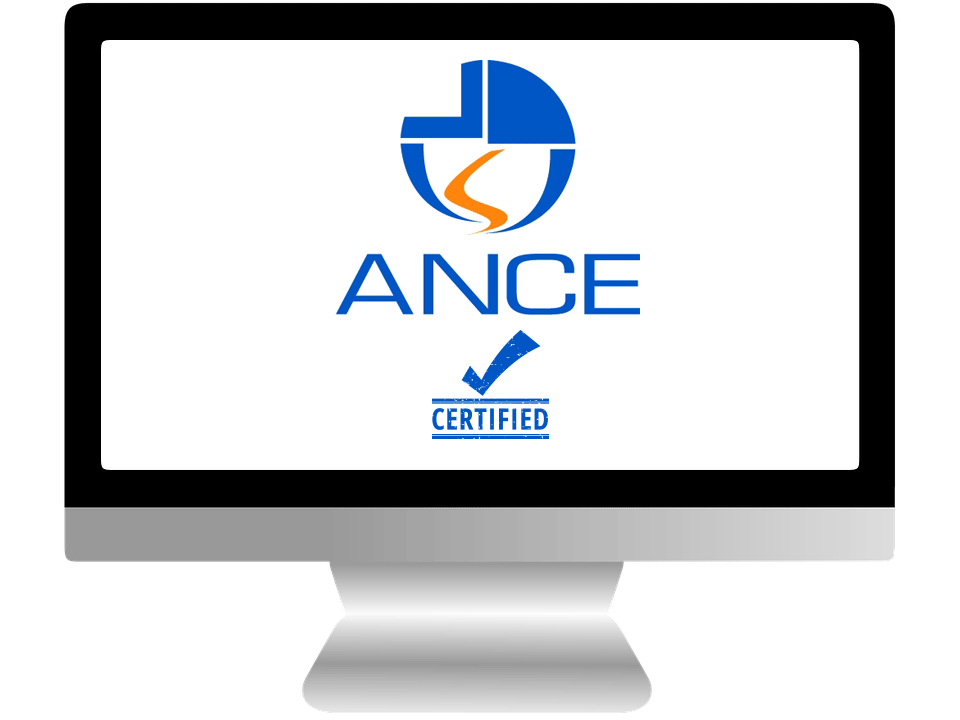 Having your documents signed online is not only a time and money saving but it is also legal. Our solution is approved by the National Agency for Electronic Certification and meets a proven legal framework. Our signatures implement all ETSI signature standards, including XAdES, PAdES, CAdES, qualified signatures that respect the law on exchanges and e-commerce in Tunisia.
> More about ANCE (National Agency for Electronic Certification)
> More about ETSI (European Telecommunications Standards Institute) > More info on the legal value of electronic signatures in Tunisia, Law n ° 2000-83 of 9 August 2000

Legal framework of the electronic signature in Tunisia

FAQ on the electronic signature

What is an electronic signature? 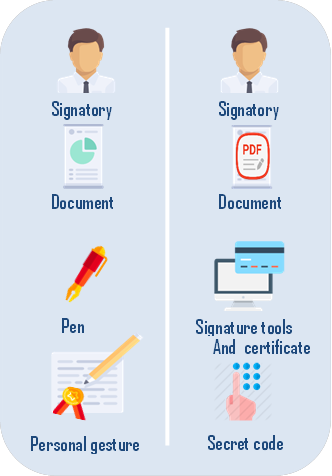 Is the electronic signature visible on the signed document?

What types of files can be signed electronically?

All types of files without exception can be signed (Word documents, PDF, XML, etc.). The most used file format is the PDF, for its portability and also the possibility of affixing several electronic signatures. But also standardized XML files for exchanges between public entities.

What is the use of the electronic signature?

Electronic signatures are created and verified through electronic certificates.

What is an electronic certificate?

What does an electronic certificate contain?

The information contained in the electronic certificate is as follows:

The electronic certificate is divided into two parts:

Who issues the electronic certificate?

When you sign a document, the signature software creates a digital fingerprint called a hash: a kind of digital digest consisting of a series of letters and numbers. The hash is unique (the smallest change in the document will produce a different hash). This hash is then encrypted (encrypted) using the private key of your digital certificate. The encrypted hash and the public key are together to compose the digital signature, appended to the document.

How to check a signature?

When the signed document is opened, the hash is decrypted using the signer's public key. Then the verification software recalculates the hash of the document: if it is identical to the hash previously decrypted, the document has not been modified. The software then displays a message certifying its integrity, as well as the signatory's name.
So the principle of the electronic signature rests on two families of algorithms, which will be used in a complementary way: 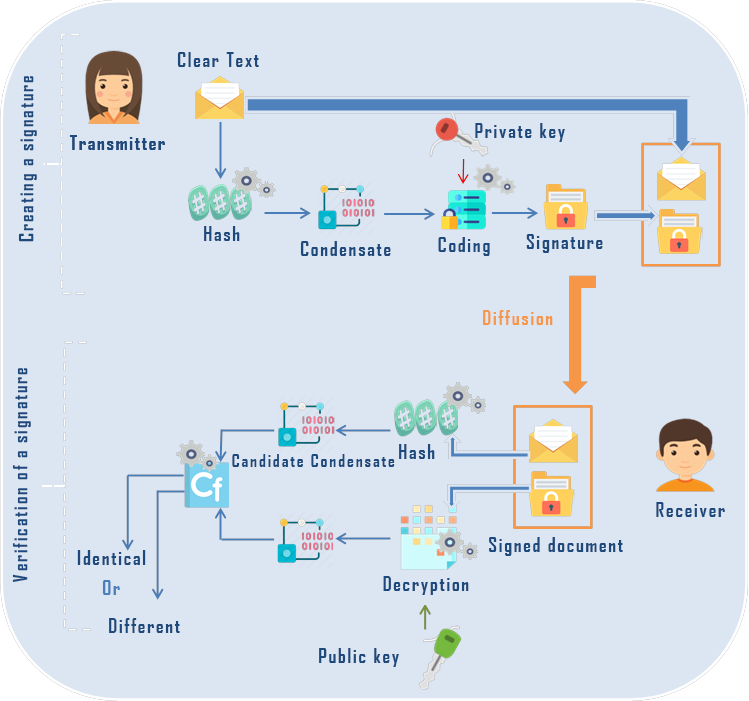 It is strongly recommended to associate a timestamp with each electronic signature.

What is a symmetric encryption algorithm?

The principle of an asymmetric algorithm is simple. A pair of digital keys is constructed in such a way that the cryptogram (encrypted text) generated from a clear text and one of the keys can be easily found only with the other key.
In practice, one of the keys is secretly kept: private key, while the other is public: public key. Only the owner of a private key (the emitter in our example) could have encrypted a decrypted text with the associated public key. 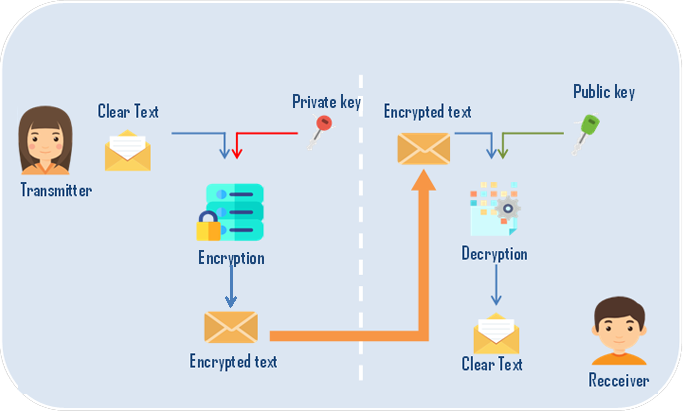 What is a hash function?

Is a one-way, collision-free function that calculates a fixed-size (or condensate) footprint from data of varying sizes. These functions are one-way because you can not find the original data from the fingerprint.
A function is said to be collision-free or injective when it is deemed very difficult to find two different sources leading to the same result.
The calculation of the condensate of a document and the comparison of it with its initial value makes it possible to control the integrity of a document. 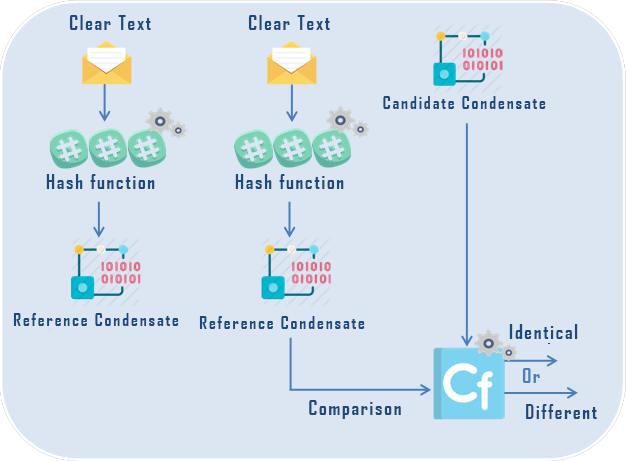 What is electronic time stamping?

Many administrative procedures involve the date of dispatch of documents: submission of applications, replies to calls for tenders, various declarations, etc. Traditional mechanisms use the postmark.
The dematerialization of such procedures requires an electronic equivalent to this postmark. The PKCS # 7 format that describes the signed data containers in the e-mail includes a field to indicate the date the message was signed. However, the date and time of the signer's workstation are used in this field. The sender can therefore cheat by indicating wrong dates. Similarly, a malicious third party who has retrieved a private key associated with an expired certificate can artificially reduce the date of his machine within the validity period of the certificate and issue signed documents.
The electronic signature of a document is therefore inseparable from a mechanism that ensures that the document existed at a given date and time and has not been tampered with since. This is the time stamp. It consists in transmitting to a trusted authority, called timestamp authority, a request including the condensate of the document to be timestamped. The authority returns to the requester a time stamp, sthe condensate, a date, and a time, all signed by the time stamping authority. 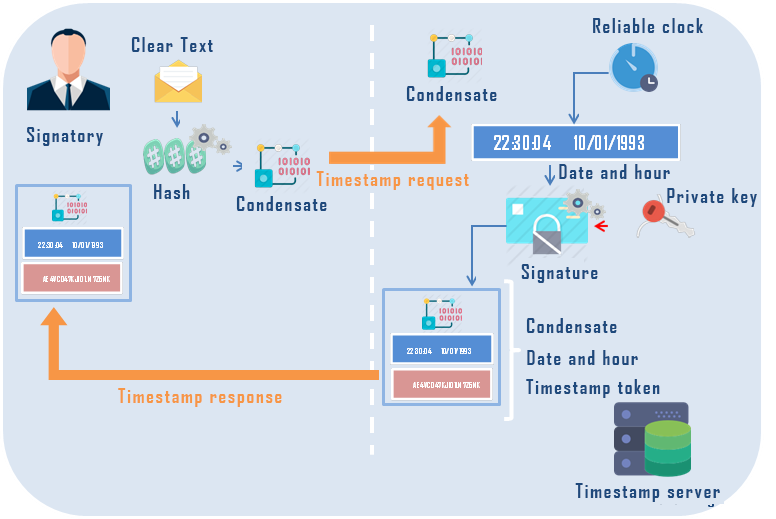 > More info on the electronic signature